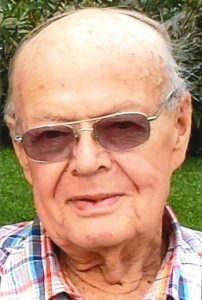 A Funeral Service was held at 11:00 a.m. on Saturday, May 19, 2018, at the Trinity Lutheran Church of Anthon, Iowa. Pastor Marty Davis officiated.

The Armstrong – Van Houten Funeral Home Anthon, Iowa is in charge of the funeral arrangements. Condolences may be sent online to www.armstrongfuneral.com.

LaVern Harold Roggatz, the son of Herman and Minna (Rumohr) Roggatz, was born February 23, 1933, in rural Correctionville, Iowa. He attended country school in Correctionville and Oto. At the age of 17, LaVern began farming in the Oto area.

On November 4, 1956, LaVern was united in marriage to Ingeborg Kuhtz at St. John’s Lutheran Church of Climbing Hill, Iowa. The couple was blessed with two children: Dennis and Kathy.

LaVern and Ingeborg made their home on the family farm for the next 41 years, raising crops and livestock.

LaVern will be remembered for being a hard worker, from sun up to sun down. His favorite part of farming was harvest time each year so he could see the rewards of his labor.

In 1997, LaVern retired from farming and the couple moved to the town of Anthon, Iowa. For the next few years, LaVern was employed at Cyclone Security located in Sergeant Bluff, Iowa.

He enjoyed fishing, woodworking and watching the Minnesota Twins. The couple also enjoyed traveling to Branson, Missouri, each year during their retirement.

LaVern was preceded in death by his parents, Herman and Minna Roggatz, and his daughter, Kathy Ryan.

The family would like to extended a special thanks to Barb, Sue and Pam from Care Initiatives Hospice and to Pastor Marty Davis for all their care and compassion over the last few months.