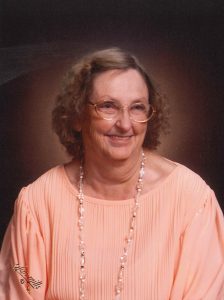 A Funeral Service will be held at 10:00 a.m. on Friday, May 25, 2018 at the Church of Christ of Anthon, Iowa. Her sons — Tim, Dan and Steve Brewer — will officiate, with Committal Services following in the Oak Hill Cemetery of Anthon, Iowa.

The Armstrong – Van Houten Funeral Home Anthon, Iowa is in charge of the funeral arrangements. Condolences may be sent online www.armstrongfuneral.com.

Shirley Alice Brewer, the daughter of Enan and Carrie (Bolles) Mizer, was born August 26, 1931 in rural Anthon, Iowa. She grew up in the Anthon, Oto, and Correctionville areas.

Shirley graduated from Correctionville High School with the class of 1950. Upon graduating from high school, Shirley moved to Omaha, NE and worked for Mutual of Omaha.

On July 23, 1955, Shirley was united in marriage to Elton Brewer in Correction-ville, Iowa. The couple was blessed with eight children: Melody, Lynn, Paul, Timothy, Sharon, Dan, Amy, and Steve.

The family lived in the Omaha, Battle Creek, Lawton and Sioux City areas before eventually settling in Pierson, Iowa in 1971.

Shirley had a love of flowers and gardening. She enjoyed canning her produce as well as baking. She would knit, crochet, read and listen to music in her spare time.

Shirley was a devoted mother, grandmother and great-grandmother.

She enjoyed being a homemaker and loved her large family dearly.  She will always be remembered as a generous woman who shared with others, welcomed all into her home, and as a woman of prayer.

She was preceded in death by her parents, Enan and Carrie Mizer; her husband, Elton Brewer; her son, Paul Brewer; her brother, Van Mizer; and her sisters, Mary (Charles) Duncan and Violet Mizer.