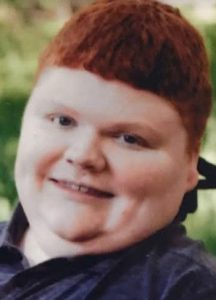 Thomas John “T.J.” Wente II, age 22, of Dakota Dunes, SD, passed away on Thursday, May 17, 2018 at a Sioux City hospital from complications of Duchenne Muscular Dystrophy.

The funeral Mass was held at 10:00 a.m. Wednesday at the Cathedral of the Epiphany Catholic Church. Burial was in Memorial Park Cemetery.

TJ lived his first 2 years in Sasebo, Japan.  The Japanese were drawn to his red hair, sweet dimples and exuberant personality.

TJ loved movies and boasted the city’s largest collection of DVDs, his favorites being “Elf,” “Star Wars,” “The Other Guys,” and “Christmas Vacation,” to name a few.

At an early age he developed a passion for “Thomas the Train.”  He had the opportunity to visit “Thomas” and ride the train a couple of times.

He attended Clark Elementary School through 1st grade when the family moved to Dakota Dunes, South Dakota.  He graduated from Dakota Valley High School with honors in 2015.

TJ took Adaptive Riding Classes through S.T.A.R.S.  and he had the opportunity to attend a Make a Wish trip to Disney World with his family.

At an early age, he would attend daily Mass with Grandma Mary Ann and his brother Jacob.  Driving in her “Jesus Car,” affectionately named by the boys because of the many religious statues and prayer cards on her dashboard.

His love of Legos caused his family to sit by his side for hours, sometimes late into the night, putting together intricate Lego kits.

TJ was a true jokester, always plotting to trick family at the many family gatherings.

He was cared for at home with constant love and attention by his entire family.  Grandma Pat was a daily presence during his 22 years.  TJ would drive his family crazy with his repeated “I’m sorry!” until they would acknowledge him.

TJ started his life in a wheelchair at about the age of 10 years.  Addison, TJ’s, service dog, joined the family at about this time.  Addison passed away in 2013.

Survivors include his mother and father, brothers Jacob and Sam and sister Rachel all at home; his grandmother, Pat Lewis; his maternal great-great-aunt, Kathleen O’Connor; and many aunts, uncles and cousins.

He was preceded in death by paternal grandparents, Tom and Mary Ann Wente; his maternal grandfathers, Jim Lewis and John Richou; his older brother Michael; his honorary aunt, Cindy Puttman; and his faithful companion, Addison.

As TJ entered the gates of heaven, Addison was waiting for him to play an active game of fetch.

TJ and his family would like to give their deepest gratitude to those who helped with his care: Dr Kathy Mathews, Christina Trout and Shelley Mockler of the University of Iowa Neuromuscular Program and their entire team over the past 19 years.  To the entire staff at Dakota Valley that made such a huge contribution in TJ’s life.

Other special caregivers were Mary Hinds, Alisha Nyreen, Lindsay Ellis, Leslie Parker, and many others too numerous to name that positively impacted his life.

The family asks in lieu of flowers that donations be made to these local charities that were near and dear to TJ’s heart: Camp High Hopes, S.T.A.R.S (Special Troopers Adaptive Riding School), Noah’s Hope Animal Rescue, and the national charity Parent Project Muscular Dystrophy-Duchenne Research (PPMD).