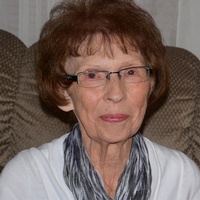 Virginia (Roberson) Williams, 89, a former long-time resident of Washta, Iowa, passed away, Wednesday, May 2, 2018 at Bellevue, Nebraska, surrounded by her family.

Funeral services were held on Tuesday, May 15, 2018 at 10:30 a.m. at the Washta United Methodist Church in Washta, Iowa with Rev. Barb Dinelli officiating, and burial will be in Sunset View Cemetery in Washta, Iowa.  Online condolences can be left at www.boothbyfuneral.com.

Virginia was born in Quimby, Iowa September 16, 1928, the daughter of Thorval and Bessie (Rutter) Roberson.

They spent their married years in Washta, Iowa. Her husband, Calvin, passed away on October 16, 1994.

Virginia was a long-time member of the Washta United Methodist Church and the American Legion Auxiliary. Virginia enjoyed antiquing and reading, and was a volunteer at many Washta functions over the years.

She was preceded in death by her husband; her daughter-in-law, Cathie (Mitchell) Williams; her parents; her sisters, Elsie (Sadler) and Betty (Dahlberg); and her brothers, Richard and Louis Roberson.