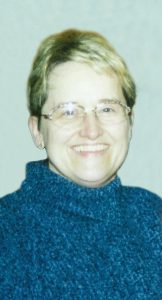 Sandra was raise on a farm by Ocheyedan, Iowa. The family relocated to Rockwell City, Iowa, where she graduated from Rockwell City High School with the class of 1974.

She continued her education at Northwestern College and graduated with a degree in music and business education in 1979.

Sandra started teaching at Ar-We-Va High School. She went on to study business education and vocational education, earning her Masters of Arts Degree in 1984 from the University of Northern Iowa.

In 1986, Sandra moved to Calmar, Iowa and started working for Northeast Iowa Community College. She was a department chair, instructor, administrator and advisor until 2007.

On July 1, 2006, Sandra married Kevin Yockey in Columbia, Missouri and the couple settled down in Anthon, Iowa.

After getting settled into her new home, she started a career at Morningside College in their graduate program, where Sandra earned her Masters of Arts Degree in Teaching.

In April of 2012, Sandra was diagnosed with endometrial and lymphoma cancer. After going in to remission, Sandra went on with her lifelong dream of obtaining her Education Specialist Degree in E-Learning in 2015 and then her Doctoral Degree in E-Learning from Northcentral University in 2017.

At the end of the year in December, Sandra was diagnosed with colon cancer.

Sandra’s dream of being published come true in 2018, when her book — entitled “Increasing Response Rates for Student’s Evaluation of Teaching, for an Online Graduate Program” — was published.

On the morning of June 6, 2018, Sandra went into the loving arms of her Lord and Savior at her residence in Anthon, Iowa.

Sandra’s love of the Lord, education, music, life and everyone around her was contagious. The best way to describe Sandra is that you were a better person for having known her. She will be deeply missed and thought of often.

She was preceded in death by her parents, Louis and Shirley Van Drie, and her sister-in-law, Janis Van Drie