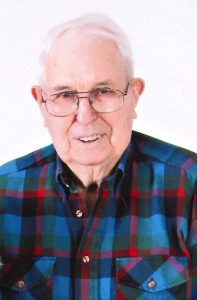 Military Rites were conducted by the Loren Hollister Post #496 of the American Legion of Mapleton, Iowa.

The Armstrong – Van Houten Funeral Home Mapleton, Iowa is in charge of the funeral arrangements. Condolences may be sent online to www.armstrongfuneral.com.

Thomas “Tom” Lester Sanford, the son of Dennis and Rose (Devine) Sanford, was born on June 24, 1918, in rural Mapleton, Iowa. Tom was raised in Mapleton and graduated from Mapleton High School with the class of 1937.

After graduation, Tom began working as a farm hand.

In 1940, Tom met the love of his life, Elsie Steinbach, in Danbury when they went on a drive in his 1931 model A coupe. In the words of Tom, “I asked her if she wanted to go for a drive. She said yes and she got in and never got out”.

Prior to his deployment overseas, he proposed to Elsie and the couple was united in marriage on January 15, 1944 in Harrisburg, Pennsylvania.

Tom served in the 5th Armored Division in Headquarters Company of the 15th Armor Infantry Division during World War II. They landed on Utah Beach on July 24.

Tom and his unit fought their way through France into Belgium, surviving the Battle of the Bulge. He chased the Germans all the way home, back to Berlin.

On August 22, 1945, Tom was honorably discharged from the service and returned home to Mapleton to be with his wife. The couple was blessed with 5 children: sons Jerry, Larry, Thomas, and Robert and a daughter, Alice.

Tom was employed by John Abraham as a wholesale grocery distributor, then for the City of Mapleton at the power plant.

He eventually spent the next 35 years working for Great Plains Gas of Mapleton until his retirement.

Tom and Elsie enjoyed square dancing and taking family camping trips while their children were growing up. He could often be found gardening, working in his yard, tinkering in his garage, or driving his car around town.

During their retirement, Tom enjoyed wintering in Arizona for years with Elsie. They also traveled to Alaska and New York.

Tom will be remembered as a loving husband, father, grandfather, great-grandfather and friend.

At the age of 99 years, 11 months and 5 days, Tom was anxiously looking forward to his upcoming 100th birthday next month and joked about wanting to drive his great-grandson’s car for that milestone.

Tom was preceded in death by his loving wife of 74 years Elsie (January 2018); his parents, Dennis and Rose Sanford; his sons, Robert Sanford and Thomas Sanford; his daughter, Alice Kluver; his granddaughter, Michelle Lara; and 4 brothers and 1 sister.