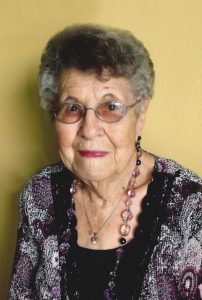 A Funeral Service was held at 10:30 a.m. on Saturday, June 9, 2018 at the United Church of Christ of Oto, Iowa. Pastor Karen Handke officiated, with Committal Services following in the Little Sioux Township Cemetery of Smithland, Iowa.

The Armstrong – Van Houten Funeral Home Anthon, Iowa is in charge of the funeral arrangements. Condolences may be sent online to www.armstrongfuneral.com.

Arlene M. Carman-McNear, the daughter of Herman and Minnie (Callaghan) Eichhorn, was born and raised on the family farm in rural Hornick, Iowa, Woodbury County.

She was baptized and confirmed in her faith at the German City Church of rural Hornick, Iowa.

On Valentine’s Day 1942, Arlene was united into marriage to A.V. “Bill” Carman in the German City Church. The couple built their home in Oto, living in the basement until its completion.

Arlene and Bill were overjoyed when God blessed them with two sons, Clifford and Ariel. Arlene enjoyed watching her sons play sports especially baseball. Bill passed from this life on December 21, 1969, due to illness.

On June 9, 1971, Arlene married George McNear in California. The couple enjoyed wintering in “the Valley” in Texas. George passed away on March 15, 1985, and Arlene continued to winter until 2015.

In 2015, Arlene started calling Maple Heights Nursing Home of Mapleton, Iowa, home until the present time. She loved flower gardening and sharing them with her church family and friends.

Arlene’s excellent cooking skills will be missed along with her classic waffles with ice cream and strawberries.

A devoted sister, wife, mother, grandmother and great grandmother, Arlene will be missed by all who had the joy of knowing her.

Arlene was preceded in death by her parents, Herman and Minnie Eichhorn; her husbands, A. V. “Bill” Carman and George McNear; her son, Clifford Carman; and her brother-in-law, John Meeves, Jr.

Left to cherish her memory are her son Ariel (Deb) Carman of Anthon, Iowa; her grandchildren, Aaron (Barb) Carman of Northwood, Iowa and Sarah (Ted) Petersen of Adel, Iowa; her great-grandchildren: Trace, Sarah Jo, Allie, Kasch and Blake; and her sisters, LaVone Meeves of Smithland, Iowa and Verna Ahl of Winnetka, California; along with extended family and friends.