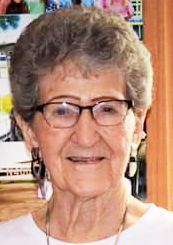 Services will be held at 10:30 am, on Monday, June 11, 2018 at Community Presbyterian Church in Lawton. Burial will be at Banner Township Cemetery following services.

Toots was born on May 11, 1928 in Smithland, Iowa to Ralph and Pearl (Sulsberger) Steinhoff and graduated from Oto High School in 1947. She married Bud Griffith. They had five children, and were later divorced.

Toots worked for the school lunch program at Lawton-Bronson Community School district, retiring at the age of 62. She enjoyed golfing, bowling, dancing, and playing cards.

Toots was the head of the Red Cross Swimming Lessons for 17 years, member of the American Legion, Eagles Club, and Lawton Fan Club. She was also an active member of the Community Presbyterian Church.

Toots was preceded in death by her parents; 2 children, Spencer Griffith and Camy Delzell; and 4 siblings.