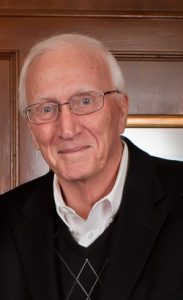 Services were held at 10:00 a.m. on Tuesday at Holy Cross Parish, Blessed Sacrament. Burial was in Calvary Cemetery.

Jim was born May 20, 1933 in Sioux City; he was the son of William and Bertha (Vonder Harr) Verschoor. Jim grew up in Sioux City and graduated from Heelan High School in 1951.

Jim and Theresa lived in Sioux City for several years following the service before moving to Lawton in 1971.

Jim was a cattle buyer for 60 years. He owned and operated Allied Order Buyers. He retired in 2015.

He served as the president of the Livestock Exchange for the Sioux City Stockyards.

Jim had a very strong Catholic faith and was a member of Blessed Sacrament Church.

He was also a huge supporter of Bishop Heelan Catholic Schools. He served as school board president for Heelan High School, as well as the Heelan Gold Club.

Attending Heelan sporting events was a favorite activity for Jim throughout the years. Jim also enjoyed watching the New York Yankees and Notre Dame football, as well as golf. He was an avid golfer who respected and loved the game.

Jim also was extremely passionate about his yard. He spent many hours on riding lawn mowers throughout the years, as well as working on home improvement activities with his wife, Theresa, and friend, Tony Cherkas. He took great pride in his home.

He also greatly enjoyed attending any activity that his children or grandchildren were taking part in throughout the years, and was a wonderful role model for all of them.

He loved everything about the Christmas season, as well as spending time at Okoboji with family in the summer.

Jim was preceded in death by his parents; a brother William Verschoor; and 3 sisters: Mary Ann Thomas, Bertha Ebel and Joanie Verschoor.

The family would like to offer a special thanks to the staff at Holy Spirit, who cared for Jim so dearly over the past year and a half.

In lieu of flowers, memorials may be directed to Bishop Heelan Catholic Schools.