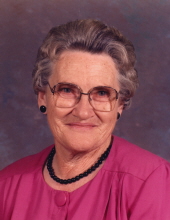 A Funeral Service was held at 10:00 a.m. Wednesday, June 20, 2018 at the St. Peter’s United Church of Christ of Mapleton, Iowa. Pastor Karen Handke officiated, with Committal Services following in the Jordan Township Cemetery of Soldier, Iowa.

Katherine Leona Kruse, the daughter of Martin Sr. and Olina (Nelson) Christensen, was born August 31, 1922, on a farm west of Mapleton, Iowa.

When Katherine was four years old, she moved with her parents to a farm east of Oto, Iowa. She attended country school there until they moved to Mapleton in 1931.

She finished the 6th and 7th grades at Mapleton Public School and then moved back to country school for the 8th grade. She graduated from Mapleton High School with the class of 1939.

On July 16, 1944, Katherine was united in marriage to Raymond W. Kruse in Coffeyville, Kansas. Raymond was still in the service at that time, so the couple traveled, lived in apartments, and waited for furloughs until his honorable discharge.

In 1946, the couple began farming on Raymond’s dad’s farm in Soldier Township then eventually moved north of Mapleton before finding their forever farm in 1951 northwest of Soldier, Iowa.

The couple was blessed with five children: Kathleen, Norma, Raymond, John, and David.

Katherine was a homemaker and farm wife while her children were growing up. She enjoyed gardening and raising her chickens.

When her children were grown, she worked as a cook at Burgess Hospital in Onawa and as a cook for the Monona County Head Start in Moorhead, Iowa.

She was preceded in death by her parents, Martin Sr. and Olina Christensen; her husband, Raymond Kruse; her sister, Juanita Thies; and her brothers, Norman Christensen and James Baagoe.