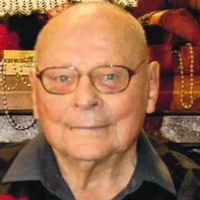 Services were held at 10 a.m. Thursday, June 14 at the Bethel Lutheran Church in Lawton. Burial will be in Memorial Park Cemetery. Arrangements are under the direction of Waterbury Funeral Service of Sioux City.

Raymond Henry Peters was born on June 26, 1925 in Hinton, Iowa, the son of Henry and Martha (Muecke) Peters. Ray was a 1943 graduate of Hinton High School.

On June 23, 1946, Ray was united in marriage to Helen Weidaman. They made their home in Lawton.

Ray worked for Swift & Co. as a butcher until retiring in 1985 when they closed the plant. For many years, he was a self-employed custom butcher.

Ray was very active with his church family at Bethel Lutheran Church. Ray and Helen did Tape Ministry for over 40 years.

They took dance lessons and enjoyed going to dances over the years, and occasionally took camping trips.

Ray went to all of his children’s sporting events. Over the years, he opened his home to other relatives when they needed a place to live.

Over the years, his kids would say with affection, “Only 3 ways to do things: the right way, wrong way, then there’s Ray’s way.”

He was preceded in death by his wife Helen, his parents, and two brothers, Merlin and Kenneth Peters.