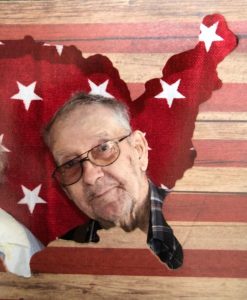 John W. Sands, age 92, of Moville, Iowa, passed away on Friday, June 15, 2018, at the Pioneer Valley Living and Rehabilitation of Sergeant Bluff, Iowa.

John William Sands, the son of John H. and Hannah (Baier) Sand, was born on October 27, 1925, in Anthon, Iowa. He grew on a farm near Anthon and attended country school.

He began farming the upper homestead of his family’s farm and then eventually purchased his own farm.

John also worked for Woodbury County in Moville, Iowa, driving a maintainer until his retirement.

On July 19, 1950, John was united in marriage to Darlene Goettsch in Sioux City, Iowa.

The couple was blessed with four children: Carol, Jeffrey, Wayne, and David.

The family made their home on the farm in rural Moville.

John will be remembered for being a hard worker who enjoyed farming and tending to his livestock.

Over his many years of farming, he transitioned from doing work with a team of horses to modern day tractors and equipment.

He was a devoted husband, father, and grandfather and a faithful member of St. John’s Lutheran Church in Climbing Hill, Iowa.

He was preceded in death by his maternal and paternal grandparents; his parents, John H. and Hannah Sand; a son, Jeffrey Sands; a son-in-law, Tom O’Connor; seven brothers: Albert, Walter, Rudolph, Fred, Louis, John “Oscar” and one in infancy; and three sisters: Annie, Mary, and Frieda.