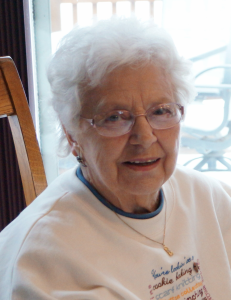 A funeral service will be held on Saturday, July 7, 2018 at 10:30 AM at the United Methodist Church of Moville with the Rev. Janet Rieckhoff – Faris officiating.  Burial will be at the Arlington Cemetery of Moville.

The Nicklas D. Jensen Funeral Home of Moville is in charge of the arrangements.

Bethene “Beth” Claire was born March 10, 1929 in LeGrand, Iowa to Joseph and Delta (Williamson) Ensminger. She graduated from Westfield (Iowa) High School and moved to Sioux City where she met the love of her life, Kenneth “Kenny” Petersen.

They were married on October 10, 1948 in Moville and resided on the family Century farm throughout their marriage. Beth loved the farm and resided there until last November when she moved to Char-Mac in Lawton, where she made many new friends and was thought of fondly.

She was nominated for the Siouxland Woman of Excellence Award in 1998. She treasured time spent with her family and enjoyed gardening, canning and flowers.

Beth died peacefully, surrounded by her children on Monday, July 2, 2018 at Mercy Hospital in Sioux City. She was 89 years old.

Beth was preceded in death by her husband of nearly 44 years, Kenneth (Kenny) and 5 sisters, 3 brothers and her parents.

In lieu of flowers, a memorial has been set up in Bethene’s name.