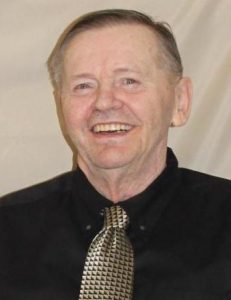 Gary was raised in rural Correctionville until 1950 when the family moved into town.  He attended Correctionville High School where he received several athletic awards for basketball, baseball, football and golf.

Upon his graduation in 1962, Gary worked for his uncle Kenneth at a local standard gas station in Correctionville.  He worked for Wilson Foods, now Tyson, in Cherokee for 44 years until his retirement in May 2009 after a stroke.

Gary was united in marriage to Tammy Andersen on March 1, 1964.  To this union three children were born: Bobbi Jo, Julie and Ricky. The couple divorced in 1987.

He was an avid Kansas City Chiefs, New York Yankees and Iowa Hawkeyes fan.  Gary also became an Iowa State fan when his grandson attended school there.  He loved watching his grandchildren’s activities.  He enjoyed going to the casino to play joker poker and also enjoyed hunting, fishing and playing horseshoes.

Gary’s smile was contagious and his sense of humor, quick wit and laugh made everyone’s day brighter.  He was a kind and generous man, and the best dad and grandpa ever.  He will be missed by many.

He was preceded in death by his parents, Bob and Opal Heath; his maternal and paternal grandparents; niece, Sheila Vaughn; nephew, Shawn McCrea; and several aunts and uncles.