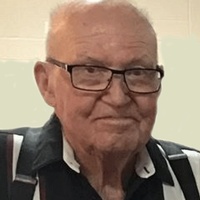 Services were held at 10:30 a.m. on Saturday, July 7, 2018 at First Lutheran Church in Kingsley, with the Rev. Steven Stoll officiating.

Rohde Funeral Home in Kingsley is handling arrangements. Online condolences may be sent to rohdefh.com.

He grew up in the Battle Creek area before going to the U.S. Army Air Corps on June 11, 1942, after he was drafted. During his military service, he was stationed in Alaska until his honorable discharge on November 10, 1945.

Following his discharge, he returned to the Ida Grove area, where he farmed.

On Jan. 22, 1949, he married Lanore Wienert. Following their marriage, they moved to a farm outside of Kingsley. It was there that they raised their family and farmed until their retirement.

Glen enjoyed farming, and his favorite part was feeding cattle.  Lanore passed away on March 15, 1996. Following her death, Glen continued to live on the farm until his death.

Glen was a member of First Lutheran Church in Kingsley and the American Legion Harrison F. Pedersen Post 291 in Pierson, Iowa.

Glen had a special friend for the last 18 years, Phyllis Schmidt, who helped Glen with many things.