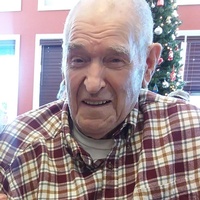 Services were held at 10 a.m. on Saturday, June 30, with Rev. Merrill Muller officiating, at Waterbury Funeral Service, (4125 Orleans Avenue). Burial was in Memorial Park Cemetery, with Military Honors provided by the U.S. Army and the American Legion George Nelson Post 662.

Leland Wagner was born on March 9, 1925 in Sioux City, the son of Lyle and Vina (Self) Wagner.

He was a 1943 graduate of the Salix High School. He enlisted in the Army and served in World War II in Europe.

On January 31, 1948 Leland was united in marriage to Norma Jones in Sioux City. They farmed in the Salix and Hornick area.

Leland was a farmer who also enjoyed tending his flower garden and feeding and watching the birds. He enjoyed playing cards and reading western books.

Leland was a 65-year member of the American Legion, George Nelson Post 662.

Leland is survived by one son, Russell and his wife Sue of Salix; 5 daughters: Linda and Rich Frederico of Willougby, Ohio; Joann and her husband Rob Finnegan of Sioux City; Sherry and her husband Dave Lenz of Sergeant Bluff; Pam Sudtelgte of Springfield, Missouri; and Robin Hinds and her significant other Dan Folsom of Hornick; his brother, Marvin and his wife Beverly of Sioux City and his sister-in-law, Paula Wagner of Salix, daughter-in-law, Janet Wagner of Hinton; 13 grandchildren and numerous great grandchildren.