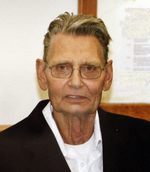 Marlin has donated his body to medical research and a burial service will take place at a later date at the Correctionville Cemetery in Correctionville, Iowa.

Marlin Lee Adams was born on July 18, 1932 on a farm in Dickinson County, Iowa to Palen and Hazel (Johnson) Adams. He graduated from Lake Park High School in 1951. After graduation, Marlin assisted his family with farming.

On November 9, 1955, Marlin was inducted into the United States Army. He served as a Field Artillery Radar Crewman until earning an Honorable Discharge on November 8, 1957.

Marlin returned home and began working for Maynard Johnson driving a gravel truck. He later took a job with Lee Johnson on a road construction crew, as well as working for Midwest Paving, Brower, Des Moines Asphalt, Hallett, Rohline and Dobson Brothers over the years.

On November 6, 1960, Marlin and Ona Lorraine Harrison were united in marriage at Correctionville, Iowa. They lived throughout the Midwest while Marlin worked road construction until his health forced his retirement in 2005.

Marlin loved playing with, and spoiling, his grandchildren. He found pleasure working in the yard and vegetable garden. He had great pride in sharing the bounties of his harvest with friends and family. When he was not working in his yard, Marlin enjoyed his trips to the casino.

He was preceded in death by his parents, a brother, Dean Adams; sister-in-law Francis Schwaller; and brothers-in-law Ray Boettcher, Lorn Harrison and Leon Harrison.