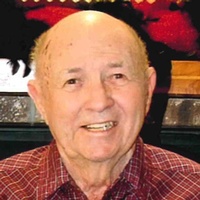 Services will be held Friday, July 13 at 10:30 a.m. at Trinity Lutheran Church in Moville, with the Rev. Barb Spalding officiating. Visitation will be Thursday, July 12 from 5:00 p.m. till 7:00 p.m., with a prayer service following.

Burial will be at Arlington Township Cemetery in Moville, with Military Honors provided by the United States Army.  Arrangements are under the direction of Waterbury Funeral Service.

He attended country school at Anthon and county school rural Moville, and graduated from Moville High School in 1947.

He worked for Huntings Grocery until leaving for the service. He served in the U.S. Army from 1951 to 1953, being stationed in Korea.

He married Aline Lavonne Ragan on June 5, 1954, They made their home on his farm  in rural Moville and raised two kids.

After losing Lavonne, he married Phyllis Hons on June 23, 1977.  He farmed for 50 years and then retired.

Over the years, he was employed at Moville Feed and Grain Elevator, Western Iowa Telephone and was an inspector for government grain bins and measured crop ground for ASCS.

His son-in-law Randy and grandson Andy are also members of the same Masonic Lodge and Abu Beckr Shrine, which makes 3 generations. His grandson Casey is also going to become a member this fall.  He was a member of the Trinity Lutheran Church, and he enjoyed farming and golfing.

He was preceded in death by his parents and two wives; a son, Ricky; and a step-son, Mark Hons.