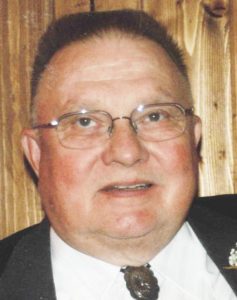 Services were held at 10 a.m. on Saturday, July 14 at First Evangelical Lutheran Church in Oakland, Nebraska. Burial was in Lyons Cemetery, with military rites.

Arrangements are under the direction of Pelan Funeral Services in Lyons.

Kendall was born to Alfred and Harriet (Fogleman) Parcel, on March 5, 1941, in Cushing, Iowa. Kendall graduated from Quimby (Iowa) High School in Iowa in 1958.

He met Sandra Mills at a dance in Washta, Iowa; by the fall they were going steady. They were married March 1, 1960, in Sandra’s parents’ living room.

The U.S. Air Force took the couple to France for a couple years. When returning to the United States, eventually they ended up in rural Lyons, where he worked for AT&T for 36 years.

Kendall took great pride in raising his Angus cattle, spending time in his garden and watching many different types of birds. He loved to be outside.

He also enjoyed sports, especially Iowa and Nebraska (since he grew up in Iowa he always rooted for them when they played each other). All these interests were shared with his loving wife.

His latest joy was welcoming his two great-grandchildren into the world with lots of love and happiness.

Kendall was the president of the Nebraska Angus Association, served on the Extension Board and belonged to the Lyons VFW.

Memorials may be directed to the family for later designation.