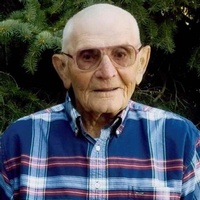 Levern grew up on the farm attending country school.    On June 3, 1942 he entered the U.S. Army, where he served until his honorable discharge on September 27, 1945.

Levern returned to the farm in the Kingsley area, where he farmed with Lester and Gordie Montange.

On November 9, 1991, he was united in marriage to Patricia M. McGuire. After their marriage, Levern and Pat continued to live on the farm.

Levern was proud to farm, serve his country, and be a good husband and grandfather.

Levern was preceded in death by his parents; six brothers: Clay, Freeman, Ted, Melvin, Cliff and Stan; two sisters, Betty and Viola; a cousin, Lester and his wife, Maudie and their son, Gordon.