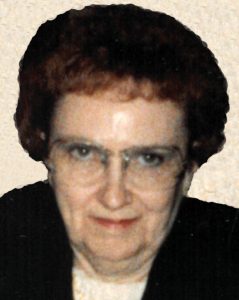 Services will be 10:30 a.m. Tuesday, July 24 at Holy Cross Blessed Sacrament Parish, with the Rev. Roger Linan as Celebrant.  Interment will follow in Memorial Park Cemetery. Visitation will be 4 to 8 p.m. Monday, with the family present at 6 p.m.

Pallbearers will be Dan and Robert Johnson and Lynn and Jeff Gross.

A vigil service, incorporating a Daughter’s of the Nile Service, will begin 7 p.m. Monday, July 23, with Neil Peck as officiant.  Online condolences may be offered at www.meyerbroschapels.com

Erma was born on April 29, 1929, on the family farm in rural Pierson, Iowa, to Harry and Minnie (Meyer) Dragoo.

She received her early education at Rock Branch School before attending Westmar College, Methodist School of Nursing, and finishing her master’s degree at the University of South Dakota.

Erma married Phillip Severson on Nov. 1, 1957, in Sioux City, to which two children were born. The couple lived on the Northside of Sioux City their entire life.

Erma taught nursing most of her career, including St. Vincent’s, Methodist Hospital, Western Iowa Tech, and the University of South Dakota.

She taught English as a Second Language (ESL) for 20 years following her retirement.

Erma owned In Stitches, and taught all crafts including needlepoint, crocheting, tatting, and knitting. She was Worthy Matron of ISIS Chapter of the Eastern Star with her husband, Phillip, who was Worthy Patron.  Erma became District Instructor under Bonnie Martin for Eastern Star, and made many friends while traveling.

Erma was preceded in death by her parents; two sisters; and a brother.

Memorials for Erma are asked to be made to the family for division to numerous charities of the family’s choice.