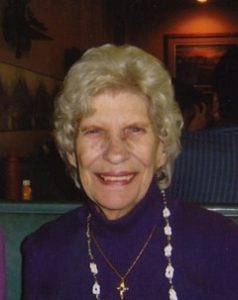 Kaye F. Thomas, age 80, of Correction-ville, passed away on Wednesday, July 18, 2018 at her home in Correctionville.

A funeral service was held on Saturday, July 21, 2018 at 10:30 a.m. at the Grace United Methodist Church of Correctionville with Rev. Kim A. Crummer officiating.

Nicklas D. Jensen Funeral Home of Correctionville is in charge of the arrangements.  Online condolences can be made at nicklasdjensenfh.com.

Kaye Frances Markusen Thomas was born August 21, 1937 to Albert and Frances (Hall) Markusen in Correction-ville, Iowa.  She was a graduate of Correctionville High School.

She was united in marriage to Clarence “Buzz” Thomas Jr. on November 18, 1955 at the Grace United Methodist Church of Correctionville.  To this union, three children were born: Kim, Carey and Casey.

Kaye and Buzz moved to California in 1956 then moved back to Correctionville two years later to start their adventure in farming.

They farmed from 1958-2003 when she retired and moved to town following Buzz’s passing.

In addition to farming, Kaye had side jobs.  She was secretary of the Chuckwagon Association for 12 years while Buzz was racing. She also played the organ for Grace United Methodist Church.

Kaye had the most amazing voice and was very gifted at the organ and piano.  She played the piano and sang in a band with Buzz who played the guitar.

Kaye always had a large garden that she tended with love and care.  She made delicious homemade bread and served it with her homemade butter, jellies and jams.  No one ever left her home hungry.

She always prepared enough to feed the thrashers, too.

She was preceded in death by her parents; her husband; two sons, Carey and Casey Thomas; and sister Betty Lou.