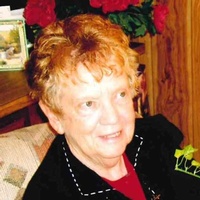 Services were held at 10:30 a.m. on Friday, July 20, 2018 at Waterbury Funeral Service of Sioux City. Burial will be at Memorial Park Cemetery.

Shirley was born on February 17, 1926 in Hornick, Iowa to Carroll and Yetta (Sattel) Spencer. She graduated from Bronson High School, where she was very active in Glee Club.

Following high school, Shirley moved to Sioux City where she was a ticket taker at the Orpheum. While working there, she met her husband, Harold, who was stationed here while in the U.S. Army Air Force.

Shirley helped Harold run his business; he was a general contractor, while also staying at home to raise their children.

She later worked for 1st National Bank / U.S. Bank, retiring after 30 plus years of employment. Shirley was a member of the Southern Hills Baptist Church.

She loved to sew and was an excellent seamstress/tailor. Her life revolved around her grandchildren.

Shirley’s faith was very important to her and she was a wonderful prayer warrior. She would start and end each day with the Lord, reading from her Bible.

Shirley stayed active, riding her exercise bike every day, up until just the last couple of months.

Shirley was preceded in death by her parents; her husband; and her brother, Gail Spencer.