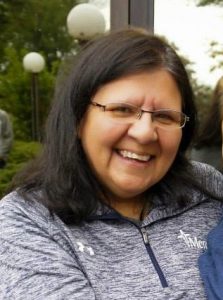 A funeral Mass was held on Saturday, July 28, 2018 at 10:30 AM at the Immaculate Conception Church of Moville with Msgr. R. Mark Duchaine officiating.  Burial was at Arlington Cemetery of Moville.

Deborah “Debbie” Jo Bremer was born September 22, 1963 in Albuquerque, New Mexico to Frank and Mona (Byers) Juarez.  She was a graduate of Woodbury Central High School in 1981.

After high school, she earned a degree from WITCC and soon after began her career as a medical transcriptionist.

Debbie was united in marriage to Johnny William Bremer on November 12, 1983 in Moville, Iowa.  Together they raised their three sons in Moville, where she had lived the past 30 years.

Debbie worked for St. Luke’s Hospital for many years, then at Midtown Medical Clinic before working at the Mercy Singing Hills Clinic for a total of 28 years.

She was a member of the Immaculate Conception Church in Moville, where she was active in the choir and as a cantor. She also sang for many weddings and funerals.

Debbie loved spending time with her children and grandchildren. She especially enjoyed watching her sons wrestle and play sports.  She enjoyed music, shopping for gifts, pets and angels.

She was preceded in death by her grandparents, Maria and Librado Juarez, August and Pearl Byers; her father, Frank Juarez; her mother and father-in-law, Jack & Darlene Bremer; and her brother-in-law, Pat Horn.