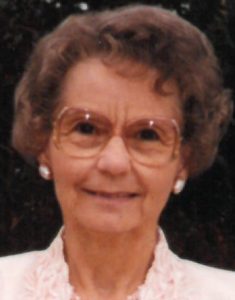 Funeral services were held at 10 a.m. on Monday, July 30 at First Evangelical Free Church. Burial followed in  Correctionville City Cemetery. Arrangements are under the direction of Meyer Brothers Colonial Chapel.

Margaret was born on November 1, 1929 in Correctionville, Iowa to Donald and Lillian (Bentley) LeFebvere. She grew up in Danbury, Iowa and later moved to Sioux City, where she attended Central High School.

Following the death of her husband, Margaret — who had never driven — obtained her first driver’s license at the age of 57. It was something she was very proud of.

Margaret was an active member of Harvey Oaks Baptist Church in Omaha and at First Evangelical Free Church, where she coordinated the crafts for Sunday school and as served as a deaconess.

She enjoyed spending time with her family and growing flowers in her garden.

She is preceded in death by her parents; her husband; a sister, Wilma Tjebben; a brother, Raymond LeFebvere; an infant sister, Shirley; and an infant brother, Bobby.