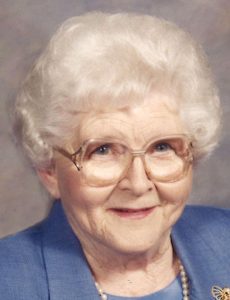 Ruth Muriel Miller, 100, of Sioux City, died peacefully on Thursday, July 26, 2018, at her residence in Sioux City, surrounded by her loving family under the care of Hospice of Siouxland.

Ruth was born November 27, 1917 in Plover, Iowa, the daughter of Rev. Glenn and Vara (James) Squires.

She attended Hornick High School, graduating with the class of 1935. She then attended Morningside College for one year.

The couple farmed for many years in the Hornick area where they raised their family. Following Dean’s death until recently, Ruth continued to be involved in the farms. She still was a farm wife at heart.

Ruth also was an active member of Hornick United Methodist Church. She moved to Sioux City in 1990.

Ruth enjoyed bowling in the women’s and couples’ leagues for many years. She also was a 50-year member of the Hornick Library Club.

She continued to stay active by traveling and driving with her sister to Washington State a few years ago, and she even took at least one bus trip.

She loved to do Crewl embroidery and made pictures for family members. She loved watching hummingbirds and spending time with her family.

She is survived by her daughters: Karen McCue of Sioux City; Merriel Miller of Moville, Iowa; Deanne Pierce and her husband, Bob of Longview, Washington; and a son, Clayton and his wife, Larie of Sioux City.

She was preceded in death by her parents; her husband, Dean; a grandson, Jason; a son, Gaylen; sons-in-law, James Beem and Bob McCue; and three sisters:  Dorothy Breck, Maribeth Bones, and Helen Barnes.