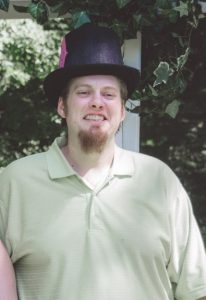 A celebration of life was held on Saturday, July 28, 2018 at 3:30 PM at the Nicklas D. Jensen Funeral Home of Holstein with the Pastor Jay Wallace officiating.  A private family burial will be held at a later date.

Wade Michael Breyfogle was born May 30, 1989 to Jay and Lisa (Heikes) Breyfogle in Waukon, Iowa.  At age 2, the family moved back to Holstein, where Wade spent his childhood.

He was active in Boy Scouts. He graduated from Okoboji High School and then attended Motorcycle Mechanics Institute in Phoenix, Arizona.

Wade lived and worked in several places upon leaving MMI. Wade had just recently moved back to Holstein and had just starting working a Simonsen’s in Quimby.

Wade was the type of person who would talk to anyone and could always make you smile.  He will be remembered for his great sense of humor.

He was preceded in death by his grandfather, Duane Heikes.

A memorial fund has been set up in Wade’s name to be given to a charitable organization(s) dealing with suicide and mental illness.