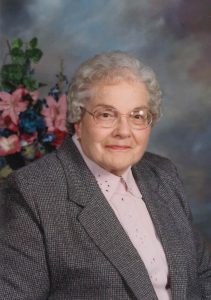 Mrs. Elizabeth “Liz” Eickholt, the daughter of Linfred and Edith (Staley) Ahart, was born on August 30, 1924 in Buck Grove, Iowa.

On February 12, 1945, Liz was united into marriage to Roland J. Eickholt in Sioux City, Iowa. She lived in the Anthon and Correctionville areas all of her married life.

She will be fondly remembered for her chicken & noodles, cinnamon rolls, cookies and pies.

She was preceded in death by her parents, Linfred and Edith Ahart; her husband, Roland Eickholt; and one brother and one sister.