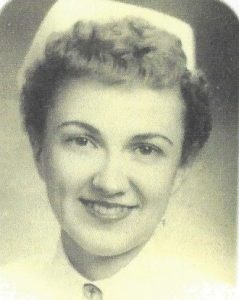 Erma was born on April 29, 1929, on the family farm in rural Pierson, Iowa to Harry and Minnie (Meyer) Dragoo.

She received her early education at Grand Meadow School before attending Westmar College & Methodist School of Nursing, and finishing her master’s degree at the University of South Dakota.

Erma married Phillip Severson on November 1, 1957 in Sioux City, and two children were born. The couple lived on the Northside of Sioux City their entire life.

Erma taught nursing most of her career, including St. Vincent’s, Methodist Hospital, Western Iowa Tech, and the University of South Dakota. She worked at St. Joseph’s, Marion Health, and St. Luke’s Hospital.

Erma volunteered during Flight 232. She taught English as a Second Language (ESL) for 20 years following her retirement.

Erma owned In Stitches, and taught all crafts including needlepoint, crocheting, tatting, and knitting.

She was Worthy Matron of ISIS Chapter of the Eastern Star with her husband Phillip as Worthy Patron. Erma became District Instructor under Bonnie Martin for Eastern Star and made many friends while traveling.

Erma was preceded in death by her parents; two sisters, Sylvia (Dragoo) Richards and Ruby (Dragoo) Gross; and a brother, Orlan Dragoo.