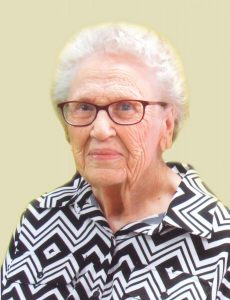 A Funeral Service was held at 10:30 a.m. Wednesday, August 8, 2018 at the Armstrong-Van Houten Funeral Home of Anthon, Iowa. Pastor Karen Handke  officiated, with

Committal Services following in the Oak Hill Cemetery of Anthon.

Lucille served the public since she was a teenager working in many businesses in Anthon, Iowa.

Lucille served as a City Clerk and sat as a Council member of the City of Anthon.  She was a member of the American Legion Auxiliary since 1947 and was President for 12 years as well as Chairman of the board of the Community Center.

Lucille was a member of the Church of Christ.  She enjoyed spending her time crocheting and coloring with colored pencils.

Her best times were spent playing cards with her lady friends around Anthon and spending time with family and friends, whether it was in person or just visiting on the phone.

Lucille always had time for picking up her best friend Lorraine Bottjen and taking a ride to Correctionville Drive Inn for something to eat or just ice cream treats — not to mention Lucille’s and Lorraine’s visits to one of the local Casinos.

Lucille loved people and they loved her.  She touched you in many different ways.  Her sharp mind and her quick wit would leave you with a tear in your eye and a smile on your face.

Lucille had a hard time saying no to anyone. She was always willing to help anyway she could and enjoyed doing it.  It is a true honor to call Lucille Mom, Grandma, and Friend.

Lucille was preceded in death by her parents; her husband, Robert “Bob” Junior Fisher; her daughters, Reta Gotto Yockey and Shirley Jane Fisher (in infancy); a brother, Vic Banta; and a grandson, Brent Hansel.