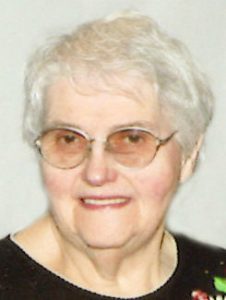 Memorial services will be 11 a.m. Wednesday at Morningside Chapel, Christy-Smith Funeral Homes, with the Rev. Michael Cooper officiating. Visitation will be 10 a.m. until service time Wednesday at the funeral home. Condolences can be left online for the family at www.christysmith.com.

Mary Jo was born on June 3, 1936, in Westfield, Iowa, to Ruben and Pearl (Lines) Tague. The family moved to Climbing Hill, Iowa, a few years later and then to Sioux City, where Mary Jo attended school, graduating from Central High School in 1954.

Mary Jo married Raymond Cain on July 14, 1956, in Sioux City. She was a stay-at-home mom, raising their seven children.

She enjoyed sewing, long Sunday car rides, and babysitting her grandchildren and great-grandchildren.

She was preceded in death by her husband; a grandson, Andrew Sanford; two brothers; and three sisters.