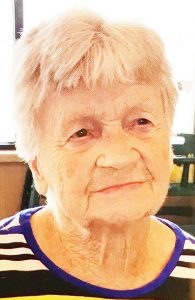 Services will be held at 5 p.m. on Wednesday, August 15, 2018 at Waterbury Funeral Service of Sioux City (4125 Orleans Avenue). Private burial will be noon on Thursday at Memorial Park Cemetery. Visitation will start at 4 p.m. on Wednesday at the funeral home.

On February 9, 1945 she was united in marriage to Daniel Thornton. They owned and operated Thornton Plumbing in South Sioux City from 1974 to 1985. They later moved business to Sioux City, and upon their retirement, the business was sold to their sons Lon and Ron.

Over the years Mickey was an avid Nebraska football fan. In her youth, she enjoyed boating and water skiing.

She loved doing yard work over the years (summer and winter) until her health delegated that to others.

She was preceded in death by her parents, husband Daniel, a daughter Jana Lee Thornton and a son, Lonnie Thornton.