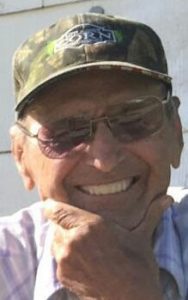 Burial of the cremains was in the Quimby Cemetery at Quimby, with military rites by L.A. Wescott Post 2253 of the V.F.W. There was a family prayer service at 10:45 a.m. Wednesday at the church. Online condolences can be left at www.boothbyfuneral.com.

Pete was born March 1, 1933 in Ida Grove, Iowa to Theodor and Catharena (Petersen) Godbersen. He graduated from Galva High School in 1951.

He enlisted in the United States Army in May 1953. He did his basic training at Fort Leonard Wood, Missouri for heavy machinery operation of tanks, road graders, and backhoes. He served during the Korean Conflict, being honorably discharged as a corporal in April 1955.

Pete farmed all his life. He had also worked for Simonsens as a feed truck driver.

He purchased land in 1968 and milked Holstein cows for 42 years from 1959 until 2001. At that time he started going to coffee with his friends, since he had a little extra time on his hands. On March 1, 2018, he semi-retired from farming but retained his position as chief adviser for the farming operation.

He loved his life on the farm.  He enjoyed reading western novels, watching old westerns on TV, spending time with his grandchildren and great-grandchildren, playing cards and checkers, sitting outside at the picnic table and going to the Family Table for a hot beef sandwich.