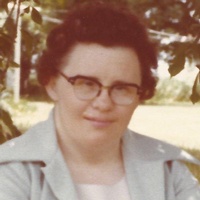 Hockenberry Family Care in Atlantic, Iowa, is in charge of the arrangements.

Joyce was born with Down syndrome.  She was raised in Lawton, Iowa, until the age of 12.

When she was young, she was taught how to read by her grandmother, Addie Van Syoc. She always enjoyed reading and going to the library. Joyce was a proud Girl Scout in her younger years.

Joyce attended elementary school in Lawton through the sixth grade.

Due to her disability, Joyce moved to the Powell School in Red Oak, Iowa, for several years. From there she moved to Bethphage Mission in Axtell, Nebraska.

While at Bethphage she was able to work with little children, and also with the laundry and in the kitchen.

As the laws and government changed in regards to the housing of people with disabilities, Joyce moved out of the housing at Bethphage and lived in Kearney, Nebraska, with two families.

After a time, she was able to get her own apartment, which was always her dream.

She continued to work at Bethphage after she moved out until she got a job at a church day care. Joyce treasured working with the children, and the children always loved her.

Joyce always said, “I want to help people”, and she did. While living in Kearney she became an active member of “People First”. She was a faithful member of New Life Assembly Church in Kearney.

During her retirement, she enjoyed her social time at the senior center in Kearney. In 2011, her health began to fail so she moved to Atlantic Specialty Care to be close to her sister, Karen, once again.

Joyce is survived by her twin sister, Karen (Ernest) Thomsen of Cumberland, Iowa; her brother, Dale (Connie) Peterson of Lawton, Iowa; many nieces, nephews, other relatives and friends.

She was preceded in death by her parents, Louis and Bessie “Jerry” Peterson.