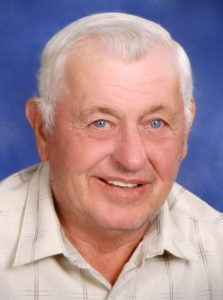 A funeral service will be held on Friday, September 7, 2018 at 10:30 a.m. at the Salem Lutheran Church, rural Correctionville, Iowa, with Pastor Tami Groth officiating.

Burial will be at the Kingsley Cemetery with military rites being conducted by the U.S. Navy and American Legion Nash Post 140 of Kingsley.

Visitation will be held on Thursday, September 6, 2018 from 5:00-7:00 pm at Rohde Funeral Home in Kingsley. Condolences may be made online at rohdefh.com.

Rich was born June 30, 1932 in Correctionville, Iowa to Roy and Garnet (Aldag) Janssen. He graduated from Anthon High School.

He served in the Navy from 1951-1955 and in the Korean War on the USS Iowa ship. After being discharged, he drove truck for several years.

He married Melva (Norr) Janssen on March 14, 1958 and moved to the Kingsley area to farm.

Rich loved the outdoors. He raised livestock and had a love for horses. He raced his chuckwagon and chariot for many years at the county fairs.

His children were all 4-H members, guided by him. He was a faithful fan at all his children and grandchildren’s sporting events.

He also loved to play cards with family and the local card players.