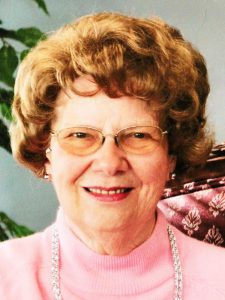 Memorial Services were held at 2:00 p.m. on Sunday, September 9,  at Westminster Presbyterian Church (2915 Glenn Avenue, Sioux City). Private interment will be at a later date in Graceland Park Cemetery.

Naomi was born January 21, 1928 in Correctionville, Iowa to Alex and Elsie Fullerton as the last of eight children.

After graduating from high school, she took courses at a business school in Omaha before moving to Sioux City.

After nearly three decades of working in the Woodbury County Attorney’s office, Naomi retired in 1991 and was honored with a column in The Sioux City Journal that focused on all of the people she had helped while there.

When they were growing up, she delighted playing the role of Art Fleming/Alex Trebek in their Friday night family Jeopardy competitions, always complete with popcorn and M&Ms.

From neighbors to church friends, from co-workers to college students working in Sioux City for the summer, she warmly welcomed a variety of guests into her home.

She was famous for her open houses at Christmastime — not to mention the thousands of promotional buttons she collected.

Naomi loved to laugh and joke with others. She was especially mischievous every April Fool’s Day.

For over 20 years in retirement, she enjoyed square dancing, continuing education classes, and volunteering throughout Siouxland, including reading for the blind.

She was an active member of Westminster Presbyterian Church for more than 65 years and was honored by the church in 2012 with the Lydia Lifestyle Award.

Those left to honor her memory include her husband, John; sons Brian (Jennifer) and Craig (Nancy); and five grandchildren: Katrina, Teddy, Audrey, Valerie, and Lieve.

In lieu of flowers, memorial donations may be made to a charity of your choice in memory of Naomi.