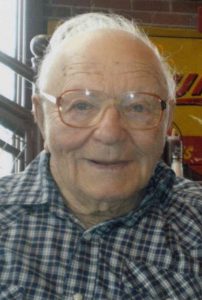 Burial was at Arlington Township Cemetery, Moville, Iowa, with a military graveside service conducted by American Legion Nash Post 140 of Kingsley and the U.S. Marine Corps.

Bob was born September 4, 1924, Moville, Iowa, the son of Howard and Ila (Sherwood) Bleil.  He graduated from Moville High School in 1942.

After graduation, he enlisted in the United States Marine Corps. On February 8, 1944, he went to Camp Pendleton in California for his basic training. He was then stationed in the Pacific, where he fought during World War II.

He was a rifleman and truck driver during his tour of duty with the Marines until his honorable discharge on May 4, 1946.

After World War II, Bob returned to the Moville area where he farmed and raised livestock.  He married Mary McElrath on April 10, 1948 in Moville, Iowa.

After their marriage, Bob and Mary bought a farm located northwest of Kingsley, Iowa.  They were members of the Union Township Presbyterian Church.

Bob was a member of the Remsen Union School Board for eighteen years.

He belonged to the American Legion Posts located in Kingsley and Moville. He also served as a Union Township Trustee for many years. He volunteered for many activities at the Union Township Presbyterian Church and later at Kingsley United Methodist Church.

His wife Mary passed away in 1983 of cancer.

On July 8, 1995 he married Evie Riemenschneider at the Union Township Presbyterian Church.  Following their marriage, they continued to live on the farm until they moved to Kingsley, Iowa, because of health issues.

Bob enjoyed watching his family coach and participate in sporting events and activities.  He spent many hours playing cards with his family and friends. He never tired of farming and was proud to be a citizen of the United States.

Bob was preceded in death by his parents; his first wife, Mary; his son, Fred; a grandson, Chad Gernhart; a sister, Dorothy (Norm) Petersen; a brother-in-law, Bob Davis; and a sister-in-law, Donna Bleil.