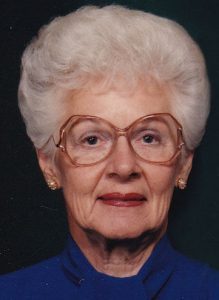 Memorial services were held at 11 a.m. on Tuesday, September 11 at Alton Presbyterian Church. The Rev. Harlan De Jong officiated. Interment will be prior to the service in Nassau Township Cemetery near Alton.

There was a family prayer service at 10 a.m. Tuesday at Oolman Funeral Home in Orange City.  You may express your sympathy at www.oolman.com.

Sylva was born February 18, 1921 in Alton, the daughter of Martin and Bertha (Van Zandbergen) Dykstra. She was raised in Alton, where she graduated from the high school as valedictorian. She also attended a beauty school in Sheldon, Iowa, and later worked in Denison, Iowa.

On March 29, 1946, she married Robert Max Kiernan in Alton, after he returned from serving in the United States military during World War II. They first made their home in Moville, Iowa for seven years.

In 1954, they moved to Alton, where Max began his career at the Alton Savings Bank. She was a homemaker and stay-at-home mom to their three sons.

Sylva grew up in the Great Depression, which shaped her entire life and that of her family. She felt that mothers were special people, holding their child’s hand for a moment and their hearts for a lifetime.

She was a faithful member of the Alton Presbyterian Church for more than half of the church’s existence. She was a long-time member of the choir and also taught Sunday school classes and participated in the Ladies Circle.

“Behind every great man is a great woman” — This was certainly the case for Sylva.

She and Max traveled the state of Iowa and the entire country on banking business. They also toured many parts of the world, following Max’s footsteps in Europe, finding her ancestral home in Sexbierum, Friesland, and going to other foreign shores for pleasure.

They enjoyed wintering at Fountain of the Sun in Mesa, Ariz. Max passed away on Sept. 1, 2005 in Orange City, after more than 59 years of marriage.

In 2015, Sylva moved to Le Mars, and in February of this year, she transferred to Prairie Ridge.

In addition to her parents and husband, she was preceded in death by a son, Martin Kiernan; her three sisters and their husbands; a brother-in-law and his wife; and a sister-in-law and her husband.

Memorials may be directed to the P. E. O. Program for Continuing Education or the Orange City Area Home Health and Hospice.