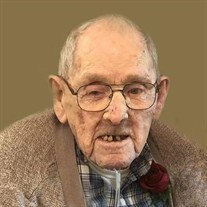 A funeral service was held at 10:30 a.m. on Saturday, September 15 at Grace United Methodist Church with the Rev. Jim Shirbroun officiating. Interment was in Memorial Park Cemetery in Sioux City, Iowa.

Online condolences may be made to the family at www.christysmith.com

Robert was born Tuesday, June 22, 1920 in Moville, Iowa, to Benjamin and Flora (Reed) Williams. He attended school in the Moville area.

He helped on the family farm until he was 21. He moved to Sioux City and worked for several different packing houses and Hubbard Feed Mill.

He married Stella (Shattuck) Moore on Sept. 27, 1947 in South Sioux City, NE. The couple made the Morningside area their home and raised their family there.

Robert went to work for Sioux City Battery and became a foreman on the assembly line.

He loved farm life, horses, going fishing and hunting. He was a member of Grace United Methodist Church.

He was preceded in death by his wife Stella; three brothers: Thomas, Donald and Charles Williams; and three sisters: Joyce Whitaker, Dorothy Williams and Evelyn Torno.

The family would like to extend their gratitude to the entire staff at Hillcrest Health Care Center — especially the younger high schools kids — for all the love and care that Robert received while he was there.