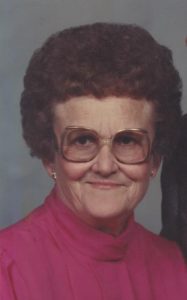 Arlene was born on September 16, 1927 in Holstein, Iowa the daughter of Paul & Emma (Pries) Krambeck.

She was a member of the United Methodist Church of Moville and was a chairperson for the Moville Election Precinct for many years.

She enjoyed baking, gardening, shopping and winning at the casino.

Arlene was preceded in death by her Parents, Husband & Brother- Elden Krambeck.

Arlene will be buried at Cushing Cemetery in Iowa.  Memorials are suggested to Arlene Gray Memorial Fund in care of Garnand Funeral Home.  Condolences may be posted at www.garnandfuneralhomes.com