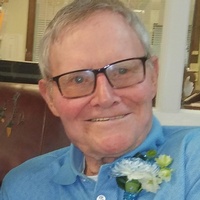 Burton Edward Weaver was born in Moville, Iowa on December 17, 1925, the son of David and Kathryn Weaver. He passed away Sunday September 23, 2018 after a brief illness.

Burton was educated and graduated from Moville High School in 1943. After graduation, he joined the Navy in November 1943 and served in the South Pacific. He was discharged in May 1946.

He married the love of his life, Eva Ione Irwin, on June 5, 1948 in Moville, Iowa. In their 70 years of marriage they enjoyed dancing, card playing, socializing, and traveling.

He was employed by Iowa Public Service as a lineman until November 1952. In December of 1952 he, Eva, Denny and Diana moved to Ravinia, South Dakota and started farming in the spring of 1953.

He farmed and ranched in the Ravinia – Lake Andes area for over 60 years. He attended auctioneering school in Mason City, Iowa in 1957 and retired from auctioneering in 1982.

He was a rural mail carrier for 26 years, retiring in November 1990.

Burton was a parishioner of St. Mark’s Catholic Church in Lake Andes; a member of the American Legion, VFW, South Dakota Auctioneers Association, and the Farmers Union.

He served a number of years on the Ravinia School Board and as township clerk in Plain Center Township.

In lieu of flowers, memorials have been established for the Alzeheimer’s Association of South Dakota and the American Heart Association.