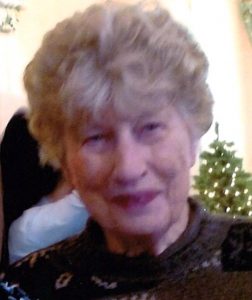 A funeral mass was held on Saturday, October 6, 2018 at 11:00 a.m. at the Immaculate Conception Church of Moville with the Msgr. R. Mark Duchaine officiating.  Burial was at Arlington Cemetery of Moville.

Darlene was united in marriage to Clifford Bush on February 20, 1960 in Moville, Iowa.  To this union, four children were born: Craig, Roxanne, Jeffrey and Roger.

Darlene worked for the Mutual of Omaha for ten years prior to her marriage to Clifford. Then she enjoyed being a homemaker for her family.

She was a member of Immaculate Conception Catholic Church and belongs to the Catholic Daughters of the Americas.  She enjoyed cats, flowers and birds.

She is also survived by brothers, Vern Mlejnek of Arkansas and Alan Hargrave of Minnesota. She was preceded in death by her parents.

In lieu of flowers, memorials can be made to the Bronson Fire and Ambulance.