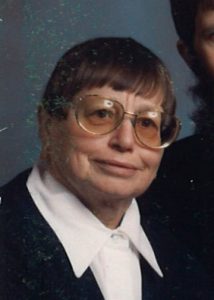 Evelyn E. King was born July 3, 1943 to Herman and Margaret Stafford at her home in Sac City, Iowa.  She attended school through 8th grade in Sac City.  She has spent the past 59 years in Sioux City.

Evelyn worked as a dietary aide at Casa del Paz for 28 years. Then she worked in the fast food industry at Burger King and Hardee’s for three years before retiring in 2008.

She enjoyed cooking for Russell. She named their kitchen in their home Evelyn’s Blue Grass Café.  Evelyn enjoyed doing puzzles and listening to the song “Can I Have This Dance?”

She enjoyed traveling with Russell on the Regency Van Service.

She was preceded in death by her parents. She is survived by her husband, Russell.