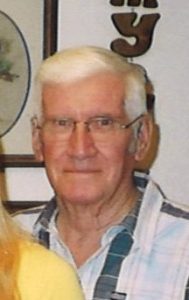 A military graveside service will be held on Saturday, October 20, 2018 at 11:00 AM at the Holstein Cemetery of Holstein with military rites conducted by the American Legion Dessel-Schmidt Post #225 of Holstein.

Burial will be at Holstein Cemetery of Holstein.  Following the military graveside service, there will be a reception and gathering at the Holstein Town and Country Club in Holstein in memory of Merle.

Merle A. Myrtue was born October 18, 1929 on the family farm near Washta, Iowa to Andrew and Laura (Kuehl) Myrtue.  He was a lifelong Holstein, Iowa resident.

In 1951, Merle joined the United States Army.  He became a Sergeant 1st Class and served in the Korean War where he earned a Republic of Korea War Service Medal.  Upon his return from Korea, he continued to serve with the Army Reserves until 1957.

Merle was united in marriage to Georgie (Anderson) Myrtue on April 11, 1953 in Sioux City, Iowa.  To this union three sons were born: Steve, Andrew and John.

Merle had many jobs through his career.  He started working at the age of 12 earning 35 cents per hour helping neighbors with their farm work. He worked on a combining crew, as a truck driver, farmer, did turkey farm work, as a mail carrier and as an electrician.

He enjoyed fishing, hunting, playing cards, golfing, bowling, cooking and taking vacation trips.  He loved his country and living in Holstein where he could share a drink with friends and talk politics.

Condolences may be sent to his family at Merles home address: 416 S. Hamburg St. Holstein, IA 51025