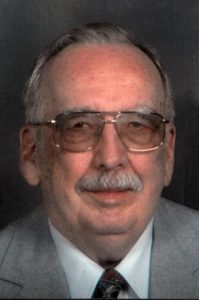 Donald Earl McMillan, 87, of Sioux City passed away Tuesday, October 16, 2018 at a local hospital after a brief illness.

A Memorial Mass was held at 10:00 a.m. Saturday, October 20, 2018 at Mater Dei Parish – Immaculate Conception Center, with Father Daniel Rupp as Celebrant. Visitation with the family present was from 9:00 a.m. until service time at the church.

Arrangements are under the direction of Meyer Brothers Morningside Chapel. Online condolences may be directed to www.meyerbroschapels.com.

Donald McMillan was born July 30, 1931 to Vaughn and Nancy Emily McMillan in Colome, SD. He grew up in Chamberlain, SD and graduated from high school in 1949.

He attended Southern State Teacher’s College in Springfield, SD where he met his wife, Dolores Helma of Kimball. They were married on August 19, 1952 before

Don left to serve in the Korean War. He was stationed at the Far East Air Force headquarters in Tokyo, Japan and was later stationed at Andrews Air Force base outside of Washington, D.C.

Don and Dolores moved to Springfield, SD in 1955, where Don finished his education and began teaching at the college in the electronics program.

He later received his Masters Degree in Mathematics and Physics from USD. Don taught at Springfield until 1984 when they moved to Marshall, MN where he taught Industrial Electronic Technology at Southwest State University, retiring in 1995.

In November of 2015, they moved to Sioux City to be closer to their daughter. Dolores passed away in March of 2016.

Don and Dolores ran D & D Crafts for many years, selling their crafts at local shows.

He was a longtime member of the American Legion Unit 132 in Springfield, SD. He loved to research genealogy, collect and polish rocks, create frets and woodwork, and raise flowers.

He served on the Board of Directors at the Marshall Senior Center, and taught computer classes to senior members, as well as serving as an instructor for AARP 55 Alive driving courses.

Don was preceded in death by his wife Dolores, his parents, sisters: Gladys Ripper and Waneta Speed, four siblings who died shortly after birth, and brother-in-law Leonard Helma.