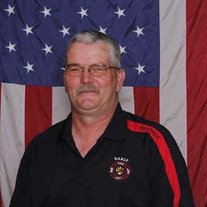 Funeral Mass was held on Monday, October 22, 2018 at 10:30 a.m. at the Sacred Heart Catholic Church in Early. Burial will be in the Good Hope Cemetery in Correctionville.

In lieu of flowers, a memorial fund has been established. The Fratzke & Jensen Funeral Home in Storm Lake is in charge of the arrangements.

He grew up in Albert City and was a member of Our Saviors Lutheran Church and the 1986 graduating class of AC-T, where he was active in all sports, band, and choir. He then graduated from NWTC in Sheldon, Iowa.
On September 15, 1990, Jay was joined in holy matrimony to Karen Kay Seehusen Mandicino in Albert City. The next 28 years of marriage they were blessed with a beautiful daughter Liberty Sue, who was the apple of Jay’s eyes.

Jay was a hardworking man, he loved working with his hands and in construction building anything. Jay worked for Early Builders for 15 years and when they closed he worked for Bargloffs for 15 1/2 years, where he took his last breath.

Jay loved the fire department, he was with Albert City Fire for 1 1/2 years with his dad and the Early Fire Department for 26 years and 5 years as assistant Fire Chief.

But most of all, Jay loved Sunday afternoons at the water fights trying to outdo his dad. Jay also played slow pitch softball for many years.

Jay was a hard core Pittsburgh Steelers, Chicago Cubs, Iowa State, and Race Fan. Jay also loved going hunting and fishing in his free time. He was a very kind and patient man.

He was preceded in death by his paternal and maternal grandparents, his father and mother-in-law Bill and Mildred Seehusen, step-son Dominick Mandicino, his Aunt Beverly Nehring and Uncle Jerry Johnson.