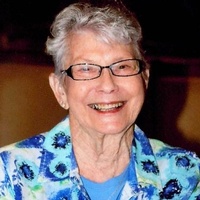 Services were held October 22 at 10:30 a.m. at Westminster Presbyterian Church in Sioux City. Burial was in Memorial Park Cemetery.

Rohde Funeral Home in Kingsley, Iowa is in charge of arrangements.

Joan was born January 3, 1930 in Bronson, Iowa, the daughter of Willard and Rozena (Oehlerking) Fish. She graduated from Bronson High School in 1948.

After graduation, she married her high school sweetheart, George Mize, on October 9, 1948.

Joan and George started a life together as farmers. They had many ups and downs, but they always kept family first. A few of their hobbies were competing in tractor pulls across northwest Iowa, square dancing, and traveling.

They were happily married for 42 years. Unfortunately, George passed away April  of 1991.

Joan loved her husband dearly, and she cherished her memories with him forever. Her love for him stayed strong through her last 27 years without him.

Joan enjoyed watching each of her grandkids grow up. She tried to support each of them in everything they did, whether it was at a first grade spelling bee or the state wrestling tournament.

She always wanted to be there, cheering for them as loud as she could. She also loved taking dance classes at the senior center in Sioux City, Iowa.

Her favorite part of the year was when she would have her Follies performances and all of her family would come watch. She also had many dear friends she enjoyed spending time with.

Joan was preceded in death by her parents, her husband, her sister Evelyn Baker, her brother Leo Fish, and her grandsons Paul Austin and Cory Nickles.