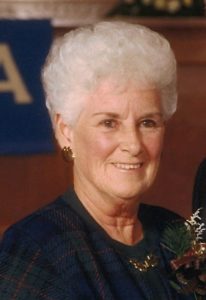 A funeral service was held on Tuesday, October 30, 2018 at 3:00 p.m. at the Grace United Methodist Church of Correctionville with Pastor Kim Crummer officiating.

Betty was united in marriage to Jr. Hunwardsen on August 19, 1944.  To this union three children were born.  Betty and Jr. farmed in the Cushing and Anthon area and moved to Correctionville in 1963.

She worked as a CNA at Colonial Manor in Correctionville for over 30 years.

Betty was a member of EUB, then Grace United Methodist church both in Correctionville.  She enjoyed collecting dolls and Santa’s, crocheting, sewing, decorating and reading.

She was lovingly referred to as Nanie, first by her grandchildren, great-grandchildren and countless others.

She loved holidays spent with her family and a picnic in the park.   A visit would always include a “little lunch” and a good game of Rummy with a hundred “May I’s.”