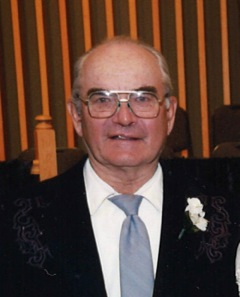 A funeral service was held on Monday, October 29, 2018 at 10:00 a.m. at the Grace United Methodist Church of Correctionville with the Pastor Kim Crummer officiating.

Harold “Duane” Burns was born on September 26, 1928 to Clara Burns. He was raised by his maternal grandparents, Frank and Ora Burns.  He was a graduate of Washta High School.

They raised their family in rural Correctionville and rural Washta until 1988 when they moved into Correctionville after retiring from farming.  Duane and Betty lived in Washta from the late 90’s until recently.

Duane worked as a farmhand and worked in construction early in his life.  He then farmed his own land for 35 years and custom farmed until 1988.  He then worked for Obeco Manufacturing and Mathers Construction.

Duane served on the Washta City Council, and he was a dedicated blood donor to the Siouxland Blood Bank.

He loved dancing, playing cards, working on the farm and talking at the coffee shop.

He is also survived by two brothers-in-law, Lester (Janet) Levin and Arnold Levin; a sister-in-law, Janet Brown; and many nieces and nephews.

He was preceded in death by his wife; his parents; two sons, Robert and Dickie Burns; a grandson, Ryan Griep; two great-grandsons; a sister, Annie Smith; a sister, Janice (Brown) Levin; and a brother Gary Brown.