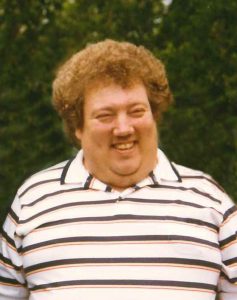 Martin “Marty” Eugene Gotto was born July 6, 1962, in Sioux City, IA. He was the son of Nicholas and Edith (Johnson) Gotto.

Marty was raised in Oto, Iowa and received his education at Anthon-Oto High School, graduating with the class of 1982.

After high school, Marty attended Western Iowa Tech Community College in Sioux City. He eventually became employed there for a number of years as a custodian. Later on, he worked for Mick Drea Farms.

Marty was well-known in the Oto area. He was very proud of his membership and participation on the Oto Fire Department.

One of Marty’s greatest joys was his nieces and nephews. Marty would often say that because he did not have children of his own, they were all like his own children, and he loved them all dearly.

Marty’s relationship with his mother was so close that with her passing, his heart was broken and he was lost without her. He is now at peace with her again. He will be greatly missed by all those that knew and loved him.

Left to cherish his memory include his siblings Steve (Sherry) Gotto of Oto, IA, Patty Gotto of Mapleton, IA and Tracy (Jessica) Gotto of Sioux Rapids, IA; many nieces, nephews and extended family and friends.

He was preceded in death by his parents Nicholas and Edith Gotto; nephew Aaron Gotto; brother-in-law Duane Banta.